Cheeky thieves entered a site in Yorkshire telling the security guards they were there to ‘collect’ a John Deere 8430 tractor. The security guards blocked the ‘collection’ as they were not informed of the action. The same people came back later, breaking in via a rear fence and removing the tractor.

Fortunately for the tractor owner, their possessions are protected by CanTrack Protect. The customer informed both ourselves and the Police about the theft and we immediately saw the tractor was being transported on a motorway so we dispatched one of our local Investigators to locate the machine.
In line with recent trends, the machine was successfully located and secured in an area of woodland near a busy motorway. The hiding location was behind a large mound of earth so it was invisible from the motorway and local roads but clearly visible to our Investigations Unit.

The tractor was recovered by the owner shortly after. 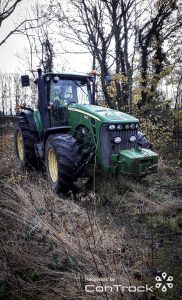 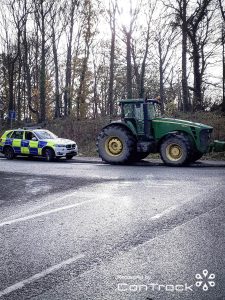 Some insights from the CanTrack Investigator.

The tractor was located some 10 miles away from the theft site close to the main motorway. It was obviously stolen to order due to the modus operandi of the theft and the fact a large bowser attached to the machine was removed before it was driven off-site and stolen. The location of the recovery is known to CanTrack Investigators having previously recovered larger type plant machines from the location in the past. It is likely that the machine was being left to go “cold” for a couple of days and would then have been loaded onto a lorry and removed from the country.