CanTrack Investigators received a call regarding an overnight theft of a Mercedes Sprinter van.  Soon after the van was moved, the wired-in GPS tracker stopped sending out a signal, indicating thieves had found and removed it.  Fortunately for this customer, they’d also invested in a CanTrack Protect unit. Essex Police were contacted and were on stand by if required. By following the signal that the CanTrack Protect unit was giving out, CanTrack investigators were able to find the exact location of the vehicle.  This time parked up in a small residential parking area about 25 miles from where it was stolen.

Not the brightest thieves we’ve ever come across.

Thieves had forced both security locks and tampered with the lock on the driver’s door.  As the van was found so quickly no other damage had occurred to the exterior. It was obvious from the condition of the interior that thieves had been searching for tracking devices.  Thankfully this customer had ensured the CanTrack Protect unit could not be found, thus enabling the swift recovery of their stolen vehicle.

Check out our tips section which demonstrates how thieves search for traditional trackers. 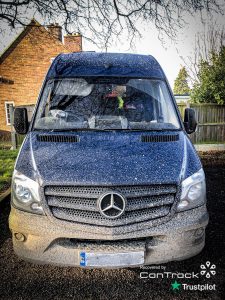